Come peace train and pick me up 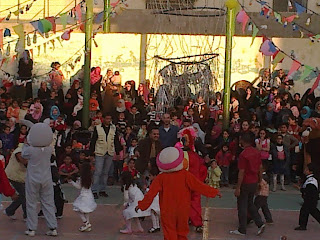 Give me my freedom and childhood back: a statement stressed on through an action day taking place on March 18th in Al Maghzi Refugee camp stationed in the Gaza Strip. Remarkably some 10,000 refugee camp kids gathered and participated in the action day entitled We Need Freedom….We Need Childhood.
Despite the fact that the Gaza Strip residents have been enduring a profound and extraordinary living conditions as a result of the on-going unlawful Israeli’s government blockade, regular military activities and internal Palestinian political conflict, children still dream of happiness and going back their normal lives.
"I am still dreaming of a better world dominated by peace and tranquility. It is more than enough what we; children in Gaza have to cope with in the 21st country. We believe that war is incredibly costly and devastating in the meanwhile, peace is much cheaper and adorable" says Asmhan Shaaban a fifteen year-old child from Al Maghzi refugee camp who participated in the event.
For several decades, exposure to tension and violence in the local community has resulted in tremendous negative repercussions for the children. This lingering situation has had negative consequences on all aspects of life, including education, health, economic situation and financial status, and social interactions and interpersonal relationships.
"When I take part in this event, I feel cheerful and relaxed. I like playing and getting my face painted. I love peace, I love the world. I dream of a better tomorrow for us, the children in Gaza where we can have a peaceful and secured environment. I need to walk around my neighborhood peacefully and pick pretty flowers. I do not like to hear Israeli fighter jets or bombardments," another participant told the organizers.
The action day was organized by the Gaza Art Gallery committee team that is organized by Unlimited Association Friends, a local non-governmental organization based in AL Maghzi Refugee camp, and sponsored by a Dutch association, Rotterdam for Gaza. The action day organizers pointed out that this event shows how the world is interconnected and human beings should share with others’ human rights grievances and happiness. Abeer Abaid, an event organizer, graciously gave her time for an interview. She extended her gratitude to Rotterman for Gaza, stating that the organization based in the Netherlands had provided outstanding support and helping make the children’s dreams come true and bringing them a little bit of happiness.
The event started directly with children at the end of the children’s school day. They were escorted by funny clowns walking around the refugee camp alleys while music and live performances were being performed. It was a public invitation for children from the refugee camp to join the biggest children’s caravan organized in Al Maghzi Refugee camp. The caravan ended up at the main refugee UNRWA (United Nation Relief and Work Agency) sports club. It was an amazing popular festival taking place in one of the most densely populated camps in Gaza and everyone was invited to share it with the children.
With smiling and painted faces, children happily joined the activities suggested, along with the youth volunteer participants. Among the activities carried out were music performances, puppet shows, and a traditional Palestinian dance, the Dabka. The event succeeded in drawing smiles for over 10,000 thousand faces, restoring the sense of hope and belief in peace for its young participants. The event stressed on the fact that the children in Gaza are not left alone and there are millions of people outside Gaza who believe in humanity, peace and justice with constant support for freedom and love. 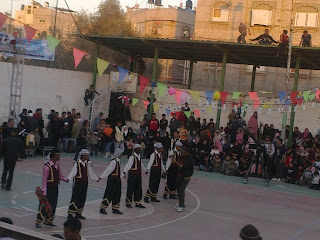 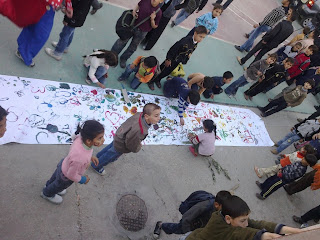 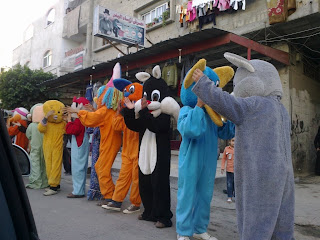 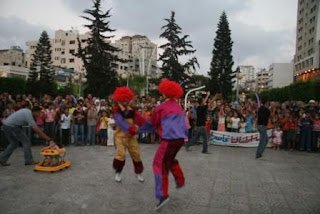 The Unlimited Friends Association cordially invites you to our action day for children entitled:

We Need Childhood…We need Freedom
The event aims at creating space for children from the Al-Maghazi Refugee camp and rebuilding the peace and love inside them. Several activities will be carried out, including Puppets' shows and popular Dabka.

The Unlimited Friends Association welcomes the participants, branding the event as a quest for freedom, and an endeavor to allow children to spend some time out of the stress and frustration.

The Unlimited Friends Association declares that this event voices a message that calls for defying the siege and emphasizing children's rights to live like any other children all over the world. Children voice slogans saying:"No to Siege, No to Destruction" & “Yes to peace, yes to love”.


The event sponsored by: Rotterdam for Gaza
http://rotterdam4gaza.wordpress.com/